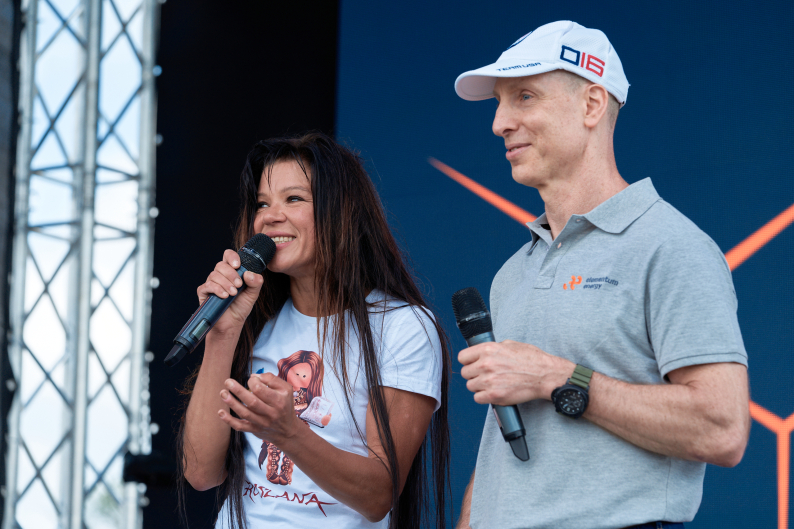 Starokozache village, Odeska oblast, June 22, 2021. A unique ethno-gastro-festival "Picnic under the windmills", where the organizers combined innovation with tradition, took place at the Dnistrovska WPP, which was put into operation by VR Capital Group's subsidiary Elementum Energy in May this year.

In Ukraine, an ethnographic festival (and in general any festival) at the wind farm is taking place for the first time. Among the hundreds of guests gathered in the open air, representatives of state and local authorities, business associations, local and foreign partners, residents of communities. Wooden benches loaded with craft cheeses, traditional meat delicacies, sausages, pastries and wines brought here by farmers from all over Bessarabia lined up under a 200-meter powerful wind turbine.

The headliner of the festival was the electro-folk band Go_A, whose combination of ethnic singing with electronic rhythms once again emphasized the special traditional and innovative spirit of the festival. Ruslana, who is the global ambassador of renewable energy in the world, also addressed the guests of the event.

"For Ukraine green energy is about energy security, that creates independence. When energy in Ukraine is produced in the wind and the sun, and not from imported gas, Ukraine becomes stronger, more independent. And we believe that it’s just the beginning of the future of Ukraine. Green energy in the future will be used not just to produce electricity, but to produce green hydrogen. The European Union has already selected Ukraine as a strategic partner for the supply of green hydrogen. We want to be part of that future, we want to invest and build more green energy. We have a vision that Ukraine will supply green hydrogen through the pipelines to Western Europe. And Europe will depend of Ukrainian hydrogen instead of Russian gas", commented Richard Deitz, founder and president of VR Capital Group.

"We built our first wind project in the picturesque region of Ukrainian Bessarabia with the great support from the local communities, authorities, partners and suppliers. For us, this ethno-gastro-festival with the involvement of the best local farmers and winemakers is a great opportunity to say ’thank you’ to this region and its people. "Picnic under the windmills" is a combination of innovations and traditions. Our company embodies the latest technologies from around the world, but at the same time, we strive to preserve the centuries-old history of our beautiful country", said Alexander Podprugin, Chief Operating Officer of Elementum Energy (Ukraine).

"In the near future, Ukraine will celebrate the 30th anniversary of its independence. I would also say that alternative energy is independence. Independence from what we are used to - coal boilers, gas. I believe that today this is an alternative. We thank the investor who was not afraid, who invested in Odesa region. We wish you success, we will help and support VR Capital Group", commented Serhii Pidhainyi, Deputy Head of the Odesa Regional State Administration.

"Wind energy is an important source of taxes for the Odesa region, for Bessarabia. It allows to develop regions, allows people to get highly skilled work. I want us to have as many such stations as possible. I wish that wind energy becomes priority for us, as well as solar and bioenergy, which today allows people to get jobs, stable wages, and most importantly - to extend life expectancy through clean air, clean environment, through the energy of peace", told the guests Andrii Konechenkov, Chairman of the Board of UWEA.

"I see a Ukrainian flag and an American flag, so it’s a kind of union between our countries. We can unite our clean energy, so it’s about our integrity. Everybody understands the language of the future, we are dreaming, we are fighting, really fighting for a clean energy future. We really want Ukraine to be proud of herself. We want the Government, the Verkhovna Rada, all the progressive people concerned to unite around the clean energy projects", said Ruslana, International Ambassador for Renewable Energy. 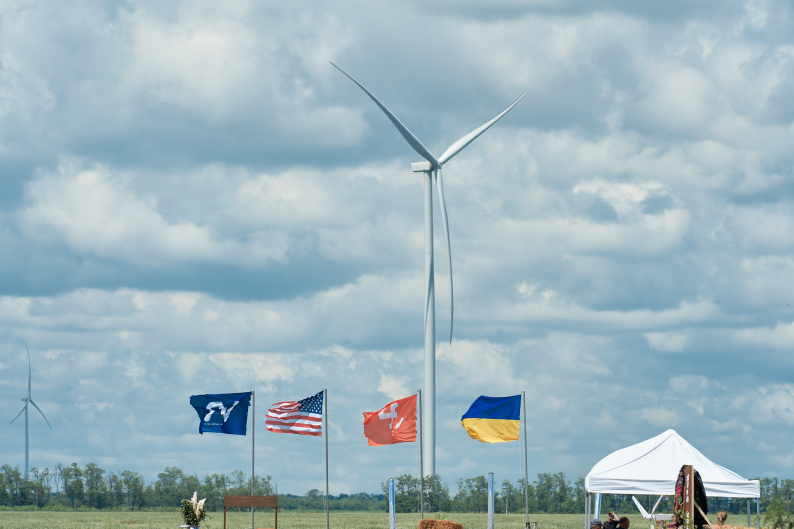 Dnistrovska WPP project is built in two Phases. Phase I, 40 MW, commissioned on May 1, 2021, is one of the largest FDI projects executed in Ukraine in 2020 with an investment of EUR 59 million. Phase II, 60 MW, is under construction and will be launched in the first half of 2022.

The company's social investment program provides for financial support to the region in the amount of 2,000,000 euros (1,000 euros per year per megawatt of wind turbine capacity installed in the territories of communities in the first 20 years of operation of the wind farm). Communities began to implement projects under this funding in 2020.

At full capacity, Dnistrovska WPP, 100 MW, will generate 360 million kWh per year, which is enough to provide electricity to up to 180,000 Ukrainian households during the year (about 1/5 of Odeska oblast households) and to avoid emitting 280,000 tons СО2 (compared to traditional fossil fuel power plants).

VR Capital is an international asset management firm serving an institutional investor client base with approximately $5 billion in investor assets. The firm operates via its principal offices in New York and London. VR Capital is one of the largest and most experienced Western investors in Ukraine, operating in the Ukrainian market since 1999.

Elementum Energy Ltd., a subsidiary of VR Capital, is an independent electricity producer operating via its principal offices in London and Kyiv, focused on the development and operation of renewable energy sources in Central and Eastern Europe. The capacity of the company's operating assets is currently 576 MW: 28 solar power plants with a total capacity of 536 MW and Dnistrovska WPP, Phase I, 40 MW.

Students of International European University conducted a social experiment: Who will help foreigners in Ukraine