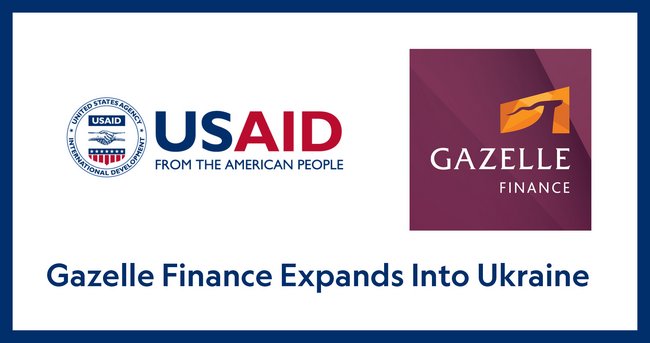 “USAID has a long and successful track record of supporting the development of capital markets in the region,” said USAID/Ukraine Mission Director James Hope. “We are excited about the launch of Gazelle Finance in Ukraine. It will address a key underserved market segment – the missing middle of SMEs – through an innovative tool with the potential to help a new generation of entrepreneurs to compete and thrive across diverse sectors.”

Since 2018, USAID has had two large-scale economic development programs in Ukraine -- CEP, which operates country-wide, and ERA, which is focused on the government-controlled areas of Donetsk and Luhansk Oblasts in addition to the Sea of Azov region in Zaporizhzhia Oblast. Key objectives of these programs include supporting new markets, improving the competitiveness of SMEs, and increasing the inflow of investments, which includes the development of the private equity and venture capital ecosystem to accelerate foreign direct investment into the country.

“An important objective of ERA is to attract institutional investment capital and know-how transfer to support SMEs in the conflict regions of eastern Ukraine, including Mariupol, Kramatorsk, and Severodonetsk,” said Michael Pillsbury, Chief of Party of USAID ERA. “Most SMEs in these regions lack the necessary collateral to secure bank financing, so Gazelle Finance’s innovative quasi-equity financial instruments, blended with value-add advisory services and know-how transfer, will provide a critical financial instrument alternative that otherwise does not exist in the marketplace today.” — added Volodymyr Cherviakov, ERA Investment Lead.

“The investment potential in Ukraine is largely untapped. With its strategic position on the eastern border of the European Union, a burgeoning IT sector, and other competitive industries, the country is poised for sustained economic growth,” said David Anderson, Chief of Party of USAID CEP. “Gazelle Finance’s entry into Ukraine plays an important role in providing growth capital to SMEs across the supply chains of Ukraine’s high growth sectors, which will generate high-paying jobs, facilitate import substitution, and accelerate hard currency denominated exports.”

Gazelle Finance is an investment company that finances high-growth small and medium size enterprises in the Eurasia Region. The company seeks to identify gaps and barriers in frontier capital markets and provide a combined financing and business advisory solution to ambitious entrepreneurs. By investing and partnering with these entrepreneurs, Gazelle Finance helps local markets and economies to expand, while generating commercial returns for its investors. For additional information, please contact Natia Mariamidze at: +995 32 2 243 432 or via e-mail: nmariamidze@gazellefinance.com.

USAID is the world's premier international development agency and a catalytic actor driving development results. USAID's work demonstrates American generosity, promotes a path to recipient self-reliance and resilience, and advances U.S. national security and economic prosperity. USAID has partnered with Ukraine since 1992, providing more than $3 billion in assistance. USAID’s current strategic priorities include strengthening democracy and good governance, promoting economic development and energy security, improving health care systems, and mitigating the effects of the conflict in the east. For additional information about USAID in Ukraine, please visit our website: http://www.usaid.gov/ukraine or on Facebook at https://www.facebook.com/USAIDUkraine.

The USAID Economic Resilience Activity (ERA) is a six-year program (2018-2024) that supports the development of a resilient, inclusive, and growth-oriented economy in eastern Ukraine. In the wake of the conflict in eastern Ukraine, ERA is empowering eastern Ukrainians to establish livelihoods and businesses in promising economic sectors, and to expand to new markets across Ukraine, the European Union (EU), and other international markets. ERA emphasizes including internally displaced persons, women, young adults, Roma, and other under-represented groups among its beneficiaries to ensure that they also share in the region’s economic success. For more detailed information about ERA, please write to info_era@dai.com or visit the Facebook page: https://www.facebook.com/ERAUkraine.

The USAID Competitive Economy Program (CEP) is a five-year program (2018-2023) that promotes a strong, diverse, and open economy by increasing the competitiveness of startups and SMEs in Ukraine. This includes increasing the competitiveness of Ukrainian products in foreign markets through improvements in the business-enabling environment, with a focus on emerging industries, investment and access to finance, exports, and trade facilitation. For more detailed information about CEP, please visit its Facebook page: https://www.facebook.com/usaidcep.ua.

MONIKA system, first of a kind in Ukraine, is now available for WNET business users